The CHIC project aims to develop sets of new chicory varieties to produce, on one hand, more and healthier inulin food fiber and, on the other hand, identify and produce medicinal terpenes in sufficient amounts. These varieties are developed via genome editing. Safety, socio-economic and environmental impact as well as stakeholders’ needs and concerns when implementing such new varieties are also investigated in this project. 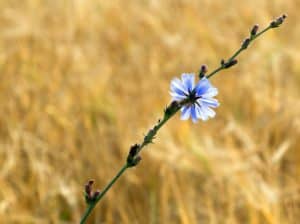 As highlights, the first chicory plants with adaptations in the genome of both the inulin and terpene biosynthesis pathways are now growing in the greenhouses until the stage that the effect of the adaptations on the inulin and terpene accumulation can be studied in the roots. Many more plants are still being produced. Methods for testing safety aspects such as off-target mutations are in development. Bioassays with extracts from roots of wild-type chicory have detected some interesting medicinal activities, including possible leads for novel antibiotics.

The CHIC project is also evaluated on its socio-economic and environmental impact six commercialisation scenarios were defined that differ in aspects such as whether CRISPR edited chicory is regulated as GMO or not, whether it is grown in the open field or greenhouses and what type of products are isolated from them.The changes at the regulatory field has consequences for the CHIC project.

Want to know more?  Read the fifth newsletter of CHIC project and explore the explanatory videos available at https://bit.ly/2DJa2Uf

EPSO is partner in the CHIC project focusing on stakeholder engagement and supporting communication.

CHIC is a research and innovation project supported through the EU Horizon 2020 funding programme with a budget of €7.3 million